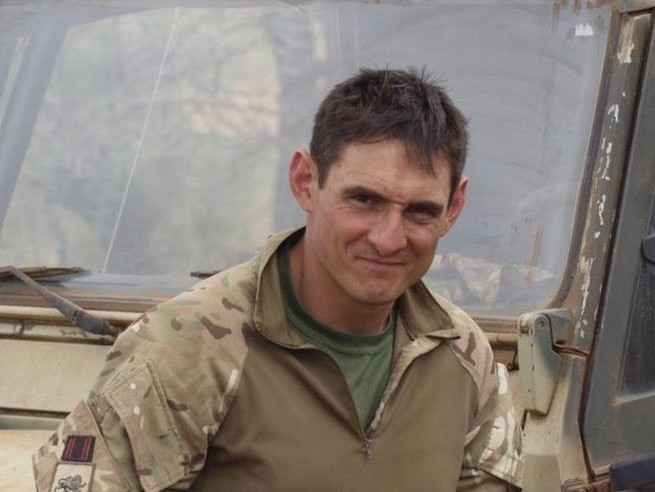 “I joined the British Army in September 1997 as a young 16 year old and completed 20 loyal years of Colour Service.  After basic training, I joined the Royal Artillery and was assigned to my first unit that was based in Osnabruck, Germany.  I spent the next 8 years at regimental duties, rapidly progressing through the ranks to Sergeant. During my time with the Royal Artillery, I completed career courses and participated in major NATO exercises in Poland, Germany and the UK. In 1999 at the age of 18, I deployed on operations to Kosovo and as a junior commander in 2003, to Northern Ireland. Both these operations helped me to develop and excel in a leadership style that would shape my future in the Army.

I transferred to the Royal Army Physical Training Corps in 2007, completing a 12-month intensive and highly competitive selection course.  Now qualified and of the rank of Staff Sergeant (SSgt), I was the key focal point to my chain of command on all aspects of Physical Development, Nutrition & Health and Sports, which I did so with distinction.  In this role, I was assigned various units throughout the remaining years of my career and visited many different countries such as St Vincent in the Caribbean, Cyprus, Latvia, Canada and Kenya. I also deployed to Afghanistan twice as a key member of the Commanding Officer’s security team.

As well as soldiering, I was an accomplished sportsman, excelling in boxing, rugby league and climbing. Holding qualifications in numerous adventure training and sporting disciplines.  During my hugely successful and active Army career, I gained my foundation degree in sports science. I have been formally recognised for my committed loyalty to the Crown, receiving the prestigious Long Service and Good Conduct Medal.

Unfortunately; having a steadfast, professional and selfless commitment approach to every role, task and appointment I undertook came at a price and had to have an operation on my knee that put a hold on the last few years of my career. I was unable to physically return to my former standard and it mentally pushed me into a dark place. After seeing a CPN for many months, I was medically discharged from the British Army on the 27 Apr 2017 and for the first time in my life, I had to find who Gareth was. I didn’t know who I was, what I liked or anything about myself. All I had known for 20 years was soldiering. I was always told that we are better than civvies and now I am a civvie. As you can imagine, messed with my head even more and I became more and more angry. I was isolating myself, smashing things around the house and not wanting to except the change and the fact that I was no longer SSgt Gardner and I was Mr Gardner.

It was my wife (Gemma) that saved me and pulled me through it all. As I did her when she left the Army a few years before I did; she told me to either be the farther and husband that she and my kids love or pack my bags and go. I couldn’t and can’t live without my family. So; I focused, pushed myself and started taking individuals on fitness classes free of charge and using my military experience to help others. It was brilliant, but it was hurting my knee again, I wasn’t fully transitioning from the Army and needed to stop and find another way.

23 Jan 2019; Gemma, introduced me to Peter Yarwood at Red Rose Recovery (RRR) and I attended a LUF (Lancashire Users Forum) steering group in Lancaster and became the North LUF Chair. I am the first to admit, I didn’t have a clue about LUF, RRR or drug and alcohol addiction. I just knew I had to do something to help my mental health, and to help others too. Peter, Emma and Rebecca explained, helped and guided me so much and I throw myself into being a RRR volunteer. Even as a volunteer I saw it as a fulltime post. It gave me purpose again, sense of being and focus that I had missed for so long.

In May 2019; I applied for the post of Team Leader in the North of Lancashire and was very fortunate to get the post. How I got it I don’t know. If I am honest, I thought I messed the interview up. It was only the second interview of my life and I answered every question that fast, that the interview board asked me to repeat each answer 2 or 3 times. I received a phone call the same evening from my new boss (Richard), telling me I was successful. I was ecstatic and overjoyed but so grateful that people took a chance on me and saw something that only my wife had seen for years.

I have completely and absolutely loved the last 16 months at RRR and am so proud to fly the RRR flag in the North. My transition from the military has been a true battle! Both physically and mentally.  I am well aware that my path of transition is nowhere near complete yet and I have many miles to go. However; it would not be possible without the help of my wife, kids and of certain members of Red Rose Recovery staff understanding me, giving me a chance and helped me find out who the real Mr Gareth Gardner is. Thank you, Red Rose Recovery I am and will always be grateful!